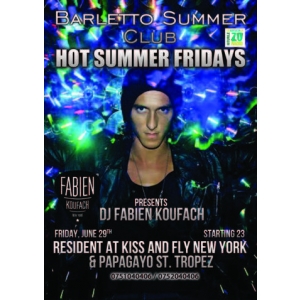 He started in winter 2004 the warm up for famous parties at Pacha Mont…pellier in France. He played next to professional DJs like Lenny Fontana, Jos Nunez, Paul Johnson, E-Smoove, Da Funk, Sandy Rivera, and many more. He played in important clubs like PACHA in BARCELONA, FRIGO in TOULOUSE, SUITE in PARIS,BYPASS in GENEVA,FAMOUS GHOSTBAR in LAS VEGAS,YOU in BRUSSELS,etc. He was the resident dj at PAPAGAYO ST TROPEZ and BUS CAF- in LYON,FRANCE. Fabien played many times next to Famous Star Dj s like MARTIN SOLVEIG, BOB SINCLAIR si DAVID GUETTA who are actually the best French House Djs all around the world. He is wanted for his own style and also for warm up of the bests parties, next to best International DJs: NIKKI BEACH ST BARTH, PINK ELEPHANT HAMPTONS. He is working also with USHER and BRUCE WILLIS. NOW he is the resident – RESIDENT Dj @ PROVOCATEUR – BAGATELLE – LA ZARZA – KISS&FLY in New York!