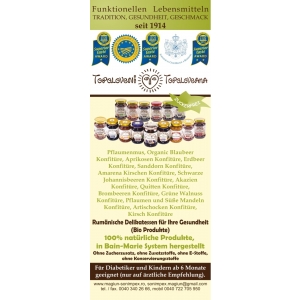 The delicatessen of Topoloveni , 100% all natural, represent Romania for the fifth time consecutive at the “Green Week” event in Berlin

The Germans fromBerlinwho will like to take a culinary journey throughRomania, will find the Topoloveni concentrated plum spread and also the Topoloveana fruit spreads  at the stand of our country, in the most important European agri-food exhibition – the Green Week, organized in 18-27 of January at theMesseExhibitionCenterinBerlin.

Most expected by the agri-food producers and also by the Berliners who are eager to make a culinary journey throughout the world, the “Gren Week”exhibition event will bring in Berlin over 100.000 culinary specialties from over 60 countries, that are displayed in 26 Halls.

At the Romanian stand, in Hall 10.2, the traditional specialties will enchant the visitors; among these they will find the delicacies prodused by Sonimpex Topoloveni: the famous Topoloveni concentrated plum spread (the only Romanian traditional product that has Protected Geographical Indication) and the Topoloveana fruit spreads, sugar free, preservatives free, E-s free.

“We are honored to be a part of the Romanian delegation for the fifth time consecutive at this event and we appreciate the efforts made by The Ministry of Agriculture, that took care every year that our products  representRomaniain this special gallery of European specialties. Because the Topoloveni concentrated plum spread is well known and expected by the Germans, we are sure that our presence at this event will increase the number of visitors at the Romanian stand and will consolidate our image as a country with a enormous potential in the  bio and organic high quality  food” declared Diana Stanciulov, the Commercial Director of Sonimpex Topoloveni.

The new Sonimpex products that will enchant the visitors are the Topoloveana fruit spreads which were released in absolute premiere in Romania  in 2012: the Jerusalem Artichoke spread (or topinambour spread), the seabuckthorn spread, the apricot spread, the acacia flowers spread, the blackberry spread and the green walnuts spread. Because of the production method (using a bain-Marie system, no sugar added, no preservatives nor other food additives) the Sonimpex Topoloveni products have a low glicemic index and can be consumed in any diets and by people who suffer from diabetes, but after having received the permission of their treating doctor.